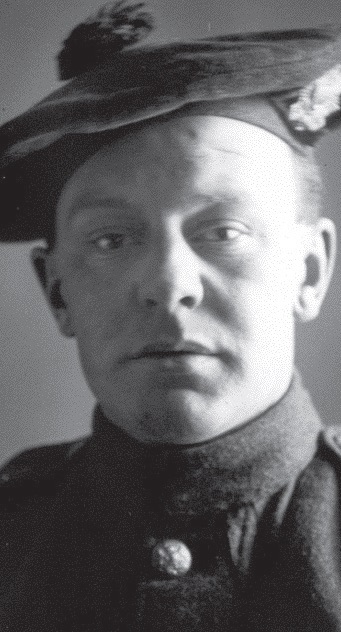 British troops had reached the outskirts of Moeuvres, east of Cambrai, on 4 September 1918 (see G Prowse VC 2-4 September 1918 above). Situated on the west bank of the Canal du Nord, the Hindenburg Support Line passed through it. Though the Allies had made extensive gains beyond the canal to the south at Havrincourt, here the Germans resisted. Corporal D F Hunter, 1/5th Battalion The Highland Light Infantry, was in command of six men in a British outpost north-west of Moeuvres. On 16 September 1918 the Germans counter-attacked and temporarily retook the area, leaving Hunter and his men surrounded. However, he managed to hold out until the British recaptured Moeuvres two days later. Hunter was awarded the VC and his six colleagues the DCM.

For most conspicuous bravery, determination, and devotion to duty. When the battalion to which he belonged relieved another unit in the front line, Cpl. Hunter was detailed to take on an advanced post which was established in shell holes close to the enemy. Relief was carried out in darkness, and there was no opportunity of reconnoitring the adjacent ground. On the following afternoon the enemy drove back the posts on Cpl. Hunter’s flanks and established posts in close proximity to and around him, thus completely isolating his command. Despite the fact that he was exceedingly short of rations and of water this gallant N.C.O. determined to hold on to his post to the last. On the evening of the second day he endeavoured to communicate with his company without result. Nevertheless he maintained his position, and repelled frequent attacks until the evening of the third day, when a counter-attack relieved him. Without food and water he had held on to his post for over forty-eight hours. Not only did he withstand constant attacks, but he had also to undergo the barrage fire of the enemy and of our own attacks, which came right across his post. The outstanding bravery, coupled with the determination, fortitude and endurance, displayed by Cpl. Hunter is beyond all praise and is a magnificent example to all.