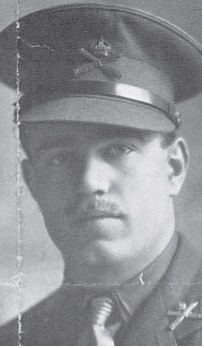 For most conspicuous bravery and initiative in attack. When the advance of the infantry was being delayed by an enemy machine gun, he rushed the gun position single-handed, shot the three gunners, and captured the gun. Later, in similar circumstances, he attacked a gun accompanied by two men, but both of the latter were immediately shot down. He went on alone to the gun position and bayoneted or shot the team of five men and captured the gun. On a third occasion, when the advance was held up by hostile fire from an enemy position, he collected a small party and rushed the position, inflicting heavy losses on the garrison. Subsequently, in consolidating the position by the skilful use of captured enemy and his own machine guns, he inflicted severe casualties on the enemy. His example of fearless and unhesitating devotion to duty under circumstances of great personal danger greatly inspired the neighbouring troops, and his action had a marked effect on the operations.