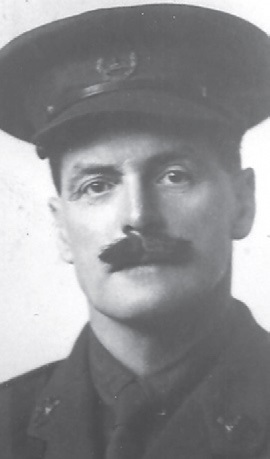 In the Macedonian Campaign, by the middle of September 1918 the Allies held a line just south of Dojran on the south-west shore of Lake Dojran, almost due north of Salonika. The Bulgarians’ positions, running west for two miles from Lake Dojran to a line of high ground known as ‘P’ Ridge, were considered by them as almost impregnable but on 18 September, British and Greek troops attempted to break through there. 7th Battalion The South Wales Borderers was detailed to follow a Greek regiment through the Bulgarian line, cross the ravine of the River Jumeaux and attack Bulgarian positions around the Grand Couronné, a hill almost 2,000 feet high, at a point known as the Rockies. This they reached but came under relentless machine-gun fire from the defenders and were forced to withdraw. Temporary Lieutenant Colonel D Burges, who was awarded a VC for his gallantry in this action, was captured by the Bulgarians but abandoned in a dug-out with one of his legs shattered. The Battalion was almost wiped out. Though the Greeks managed to advance their line half a mile to the north, for the most part the British and Greek assault was a costly failure. A further attempt the following day was equally unsuccessful. However, despite these setbacks, the tide of war was turning decisively against the Bulgarians, who signed an Armistice on 29 September.

For most conspicuous bravery, skilful leading and devotion to duty in the operations at Jumeaux (Balkans) on the 18th September, 1918. His valuable reconnaissance of the enemy first line trenches enabled him to bring his battalion without casualties to the assembly point, and from thence he maintained direction with great skill, though every known landmark was completely obscured by smoke and dust. When still some distance from its objective the battalion came under severe machine-gun fire which caused many casualties amongst company leaders. Lt.-Col. Burges, though himself wounded, quite regardless of his own safety, kept moving to and fro through his command, encouraging his men and assisting them to maintain formation and direction. Finally, as they neared the enemy’s position, he led them forward through a decimating fire until he was again hit twice and fell unconscious. His coolness and personal courage were most marked throughout and afforded a magnificent example to all ranks.