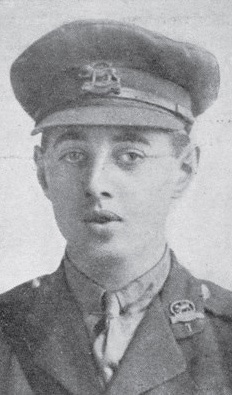 Following the Battle of Épehy on 18 September 1918, the British pressed forwards north of St Quentin towards the main Hindenburg line. On 24 September 1/5th Battalion The Leicestershire Regiment took part in an assault from the north-west on Pontruet, about a mile west of the St Quentin Canal and the village of Bellenglise, north-west of St Quentin. Lieutenant J C Barrett, in command of A Company, found himself faced by a formidable new position, Forgan’s Trench, which the Germans had dug during the night. The British failed to gain a firm foothold in Pontruet but the Germans finally evacuated it on the night of 25-26 September.

For most conspicuous bravery and devotion to duty on the 24th September, 1918, during the attack on Pontruet. Owing to the darkness and smoke barrage a considerable number of men lost direction, and Lt. Barrett found himself advancing towards Forgan’s Trench - a trench of great strength, containing numerous machine guns. Without hesitation he collected all available men and charged the nearest group of machine guns, being wounded on the way. In spite of this, he gained the trench and vigorously attacked the garrison, personally disposing of two machine guns and inflicting many casualties. He was again severely wounded, but nevertheless climbed out of the trench in order to fix his position and locate the enemy. This he succeeded in doing, and, despite exhaustion from wounds, gave detailed orders to his men to cut their way back to the battalion, which they did. He himself refused help, and was again wounded, so seriously that he could not move and had to be carried out. In spite of his wounds he had managed to fight on, and his spirit was magnificent throughout. It was due to his coolness and grasp of the situation that any of his party were able to get out alive.