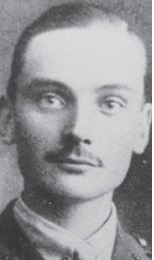 24th Division formed part of British First Army, which in September 1918 manned the Allied line from north-west of Lens to south-east of Arras. 8th Battalion The Queen’s Own Royal West Kent Regiment was in the sector north-west of Lens. Here, from 24 to 26 September 1918, Temporary Lieutenant D J Dean, with half of his platoon, held an advanced post known as Canary Trench against successive enemy attacks.

For most conspicuous bravery, skilful command, and devotion to duty during the period 24th to 26th September, 1918, when holding, with his platoon, an advance post established in a newly-captured enemy trench north-west of Lens. The left flank of the position was insecure, and the post, when taken over on the night of the 24th of September, was ill-prepared for defence. Shortly after the post was occupied the enemy attempted, without success, to recapture it. Under heavy machine-gun fire consolidation was continued, and shortly after midnight another determined enemy attack was driven off. Throughout the night Lt. Dean worked unceasingly with his men, and about 6 a.m. on 25th September a resolute enemy attack, supported by heavy shell and trench-mortar fire, developed. Again, owing to the masterly handling of his command, Lt. Dean repulsed the attack, causing heavy enemy casualties. Throughout the 25th and the night of the 25/26th September consolidation was continued under heavy fire, which culminated in intense artillery fire on the morning of the 26th, when the enemy again attacked and was finally repulsed with loss. Five times in all (thrice heavily) was this post attacked, and on each occasion the attack was driven back. Throughout the period Lt. Dean inspired his command with his own contempt of danger, and all fought with the greatest bravery. He set an example of valour, leadership and devotion to duty of the very highest order.