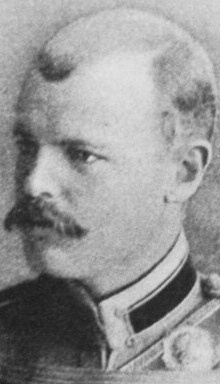 At the beginning of August 1897 following the outbreak of the Pathan Revolt, a Malakand Field Force was formed under Brigadier General Sir Bindon Blood to protect the Malakand and Chakdara passes and restore order in the Swat valley. Because of heavy rain the Force only began its advance up the valley on 16 August. The next day at Landakai the troops found the road into Upper Swat threatened by 5,000 tribesmen, massed on a ridge to their right. Blood was soon able to put the enemy to flight but some of his men, under Lieutenant Colonel R B Adams of the Guides Cavalry, engaged in a reckless pursuit of the fleeing tribesmen and were quickly in difficulties. Captain Palmer of the Guides, though wounded, was able to make his own way back but an unsuccessful attempt to rescue Lieutenant R T Greaves, Lancashire Fusiliers, led to the death of Lieutenant H L S Maclean. The mishap at Nawa Kili, however, did nothing to slow the advance of Blood’s Force. By the 19th it had reached Mingaora and there the tribesmen of Upper Swat submitted.

Lieutenant Hector Lachlan Stewart MacLean, Indian Staff Corps, on account of his gallant conduct, would have been recommended to Her Majesty for the Victoria Cross had he survived. During the fighting at Nawa Kili, in Upper Swat, on the 17th August, 1897, Lieutenant-Colonel R. B. Adams proceeded with Lieutenants H. L. S. MacLean and Viscount Fincastle, and five men of the Guides, under a very heavy and close fire, to the rescue of Lieutenant R. T. Greaves, Lancashire Fusiliers, who was lying disabled by a bullet wound and surrounded by the enemy’s swordsmen. In bringing him under cover he (Lieutenant Greaves) was struck by a bullet and killed. Lieutenant MacLean was mortally wounded, whilst the horses of Lieutenant-Colonel Adams and Viscount Fincastle were shot, as well as two troop horses.