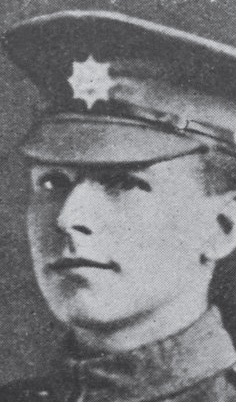 For most conspicuous bravery and self-sacrifice in the attack across the Canal Du Nord, near Graincourt. On the morning of the 27th September, 1918, L./Cpl. Jackson was the first to volunteer to follow Capt. C. H. Frisby, Coldstream Guards, across the Canal Du Nord in his rush against an enemy machine-gun post. With two comrades he followed his officer across the Canal, rushed the post, captured the two machine-guns, and so enabled the companies to advance. Later in the morning, L./Cpl. Jackson was the first to jump into a German trench which his platoon had to clear, and after doing further excellent work he was unfortunately killed. Throughout the whole day until he was killed this young N.C.O. showed the greatest valour and devotion to duty and set an inspiring example to all.