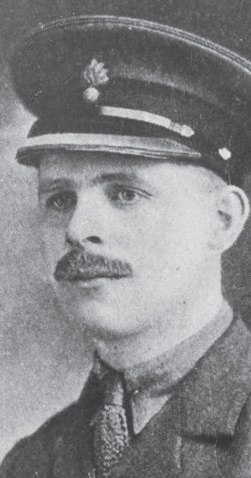 For most conspicuous bravery, skilful leading and devotion to duty during the attack of the Guards Division on 27th September, 1918, across the Canal Du Nord, near Flesquières, when in command of the 1st Battalion, Grenadier Guards, the leading battalion of the 3rd Guards Brigade. Under heavy artillery and machine-gun fire he led his battalion with great skill and determination to the “forming-up” ground, where very severe fire from artillery and machine guns was again encountered. Although wounded, he quickly grasped the situation, directed a platoon to proceed down a sunken road to make a flanking attack, and, under terrific fire, went across open ground to obtain the assistance of a Tank, which he personally led and directed to the best possible advantage. While thus fearlessly exposing himself, he was again severely wounded by a shell. Notwithstanding considerable loss of blood, after lying on a stretcher for awhile, he insisted on getting up and personally directing the further attack. By his magnificent example of devotion to duty and utter disregard of personal safety all ranks were inspired to exert themselves to the utmost, and the attack resulted in the capture of over 200 prisoners, two batteries of field guns and numerous machine guns. Lt.-Col. Viscount Gort then proceeded to organise the defence of the captured position until he collapsed; even then he refused to leave the field until he had seen the “success signal” go up on the final objective. The successful advance of the battalion was mainly due to the valour, devotion and leadership of this very gallant officer.