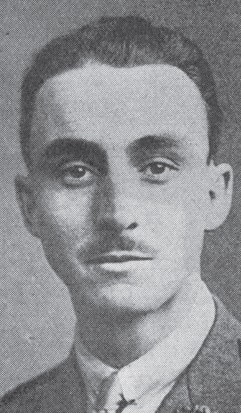 On 27 September 1918, north of St Quentin, the Allies had crossed the Canal du Nord and launched their attack on the Hindenburg Line. West of Cambrai the Canadian Divisions in First Army had broken through the Marquion Line and captured Bourlon and Bourlon Wood. On the 28th, 3rd Canadian Division captured Fontaine-Notre-Dame on the Cambrai- Bapaume road, and moved on to attack the Marcoing Line, just west of Cambrai. In the following days the Canadians pushed on east towards the St Quentin Canal and Cambrai.

For most conspicuous bravery and initiative during the operations near Cambrai, 27th September to 1st October, 1918. On 28th September, when the advance of the brigade was held up by fire from both flanks and by thick, uncut wire, he crawled forward alone and explored the wire until he found a small gap, through which he subsequently led his men, and forced an entry into the enemy trench. The enemy counter-attacked in force, and, through lack of bombs, the situation became critical. Although wounded, Lt. Gregg returned alone under terrific fire and collected a further supply. Then rejoining his party, which by this time was much reduced in numbers, and, in spite of a second wound, he reorganised his men and led them with the greatest determination against the enemy trenches, which he finally cleared. He personally killed or wounded 11 of the enemy and took 25 prisoners, in addition to 12 machine guns captured in this trench. Remaining with his company in spite of wounds, he again on the 30th September led his men in attack until severely wounded. The outstanding valour of this officer saved many casualties and enabled the advance to continue.