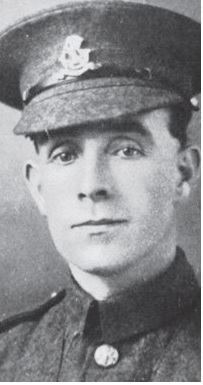 The British offensive against the Hindenburg Line at the Canal du Nord had begun on 27 September 1918 and by the morning of the 28th the 62nd Division was east of Flesquières and almost across the strip of land between the Canal du Nord and the St Quentin Canal. 186th Brigade was detailed to capture Marcoing which was on the west bank of this second Canal and help establish a bridgehead on its eastern bank

For most conspicuous bravery and initiative during the capture of the village and the crossings at Marcoing, and the subsequent counter-attack on September 28th, 1918. When, during the advance on Marcoing, his platoon was held up by machine-gun fire, he at once crawled forward, located the machine gun, and, with a Lewis gun team, knocked it out. On arrival at the crossings he restored the plank bridge under a hail of bullets, thus enabling the first crossing to be made at this vital spot. Later in the evening, during an attack, he, with eight comrades, was surrounded by an overwhelming number of Germans, and though the position was apparently hopeless, he led a bayonet charge through them, fighting so fiercely that 37 of the enemy were driven into the hands of the remainder of his company. Although twice wounded, he refused to leave till the fight was won.