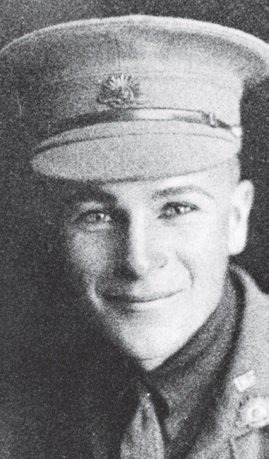 In the advance across the St Quentin Canal on 29 September 1918, the Australian-American Corps of Fourth Army was in the sector east of Hargicourt. The Hindenburg Line consisted of a Main Line, which ran just west of Bellicourt, under which the Canal ran in a tunnel, a Support System which skirted to the west of Nauroy and Magny-La-Fosse, and a Reserve System, east of Estrées and Joncourt, known as the Beaurevoir Line. 32nd Battalion (South Australia and Western Australia) crossed the Main Line and secured Bellicourt, before advancing south-east across the Support System to take Nauroy and Magny-La-Fosse. The following day the advance was more limited but on 1 October Joncourt was taken and the Beaurevoir Line reached.

For most conspicuous bravery, initiative and control during the period 29th Sept. to 1st Oct. 1918, in the operations against the Hindenburg Line at Bellicourt and the advance through Nauroy, Etricourt, Magny La Fosse and Joncourt. On 29th Sept., after personal reconnaissance under heavy fire, he led his command forward at a critical period and restored the situation. Moving fearlessly at the head of, and at times far in advance of, his troops, he cheered his men on through Nauroy, thence towards Etricourt. Still leading his assaulting companies, he observed a battery of 77mm. guns firing on his rear companies and causing heavy casualties. Collecting a few of his men, he rushed the battery, capturing four guns and ten of the crew. Then moving rapidly forward with only two N.C.O.s, he surprised and captured fifty Germans near Magny La Fosse. On 1st. Oct., 1918, he again showed fearless leading and gallantry in attack, and without hesitation and regardless of personal risk dashed forward and silenced machine guns which were causing heavy casualties. Throughout he displayed the greatest courage, skilful leading and devotion to duty, and his work was invaluable.