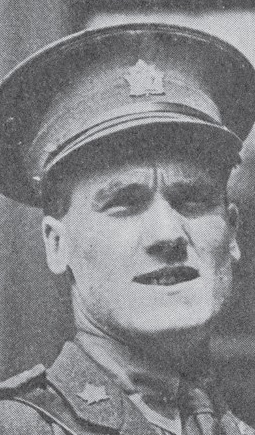 To the north of the Battle of the Canal du Nord, First Army manned the sector running south from Lens to east of Arras. The south of the sector was held by the Canadian Corps. They were already well beyond the Hindenburg Line which, north of Moeuvres, turned west, but found themselves facing various Reserve Systems. On 29 September 1918 the Canadian Corps and Third Army to the south broke through the Marcoing Line which brought the Canadians within reach of the outlying villages and suburbs north-west of Cambrai. 2nd Canadian Mounted Rifles, 1st Central Ontario Regiment, took part in the capture of Ste Olle and on 30 September of Neuville-St-Rémy, on the western side of the Scheldt from Cambrai. On 1 October they advanced east of Tilloy. Cambrai itself fell to the Allies on 9 October.

For most conspicuous bravery, leadership and self-sacrificing devotion to duty near Cambrai from 29th September to 3rd October, 1918. He led his company under intense fire, and when the advance was checked by machine guns, although wounded, pushed on and located the enemy guns. He then ran forward in broad daylight, in face of heavy fire from all directions, and, with rifle and bayonet, single-handed, put the enemy crews out of action, killing four and taking eight prisoners. His prompt action saved many casualties and enabled the advance to continue. After reorganising his command under heavy fire he rendered most useful support to neighbouring troops. When the enemy were showing stubborn resistance, he went along the line regardless of danger, organised the platoons, took command of the leading waves, and continued the advance. Later, after a personal daylight reconnaissance under heavy fire, he established his company in Neuville St. Remy, thereby greatly assisting the advance into Tilloy. Throughout the operations Capt. MacGregor displayed magnificent bravery and heroic leadership.