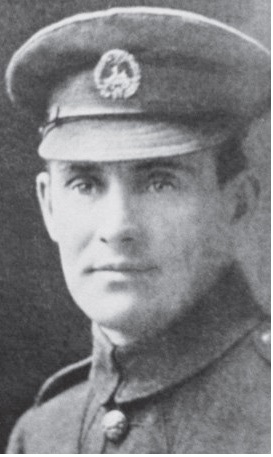 While the British Fourth Army had advanced through the Hindenburg Line in the sector between Vendhuile and St Quentin, Third Army had pushed forward north of Vendhuile. Just north of the boundary between the two armies and a few miles north of Estrées and Beaurevoir was Villers-Outréaux. The village was heavily defended and on 7 October 1918 10th Battalion South Wales Borderers came under fire as they approached. Early next morning they attacked, skirting the south-eastern side of the village to try and cut it off. The village was taken later in the day by 2nd Battalion The Royal Welsh Fusiliers.

For most conspicuous bravery, initiative and devotion to duty on the night of the 7/8th October, 1918, during the attack on Villers Outreaux, when observing that his company was suffering heavy casualties from an enemy machine gun, he ordered a Lewis gun to engage it, and went forward under heavy fire to the flank of the enemy post, which he rushed single-handed, capturing fifteen of the enemy. These prisoners, realising that C.S.M. Williams was alone, turned on him, and one of them gripped his rifle. He succeeded in breaking away and bayoneting five enemy, whereupon the remainder again surrendered. By his gallant action and total disregard of personal danger, he was the means of enabling not only his own company, but also those on the flanks, to advance.