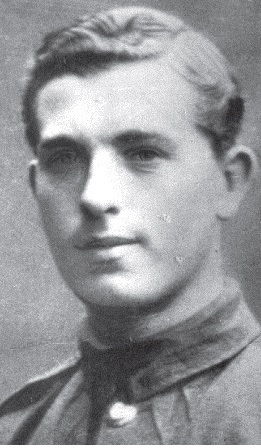 Cambrai had fallen to the Canadians on 9 October 1918. To the north and north-west of the town, the Sensée Canal formed a barrier to the advance of First Army eastwards and on 13 and 14 October various attempts were made to cross it. One attempt on the 14th, was at Aubencheul-au-Bac, which lay on the road north from Cambrai to Douai. 416 Field Company had constructed a bridge on cork floats and patrols crossed to the further bank before this began to disintegrate under enemy fire. Corporal J McPhie, 416th (Edinburgh) Field Company, RE, assisted by Sapper Cox, attempted unsuccessfully to hold the bridge together. However, because there were still men on the other side of the Canal, McPhie was ordered to attempt to repair the bridge and sacrificed his life in the attempt.

For most conspicuous bravery on the 14th October, 1918, when with a party of sappers maintaining a cork float bridge across the Canal de la Sensée, near Aubencheul au Bac. The further end of the bridge was under close machine-gun fire and within reach of hand grenades. When Infantry, just before dawn, were crossing it, closing up resulted and the bridge began to sink and break. Accompanied by a sapper, he jumped into the water and endeavoured to hold the cork and timbers together, but this they failed to do. Cpl. McPhie then swam back, and, having reported the broken bridge, immediately started to collect material for repair. It was now daylight. Fully aware that the bridge was under close fire and that the far bank was almost entirely in the hands of the enemy, with the inspiring words “It is death or glory work which must be done for the sake of our patrol on the other side,” he led the way, axe in hand, on to the bridge and was at once severely wounded, falling partly into the water, and died after receiving several further wounds. It was due to the magnificent example set by Cpl. McPhie that touch was maintained with the patrol on the enemy bank at a most critical period.