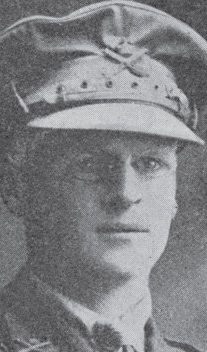 By 20 October 1918, in Belgium Second Army had crossed the River Lys, which ran north-east from Courtrai, and began to push forward towards the Scheldt. Hill 66, near Hoogemolen, is north-west of Heestert. On the following days progress slowed as German resistance intensified.

For most conspicuous bravery and devotion to duty near Hoogmolen on 22nd of October, 1918, when in command of a section of machine guns attached to the right flank platoon of the assaulting battalion. Immediately the troops advanced they were subjected to intense enfilade machine-gun fire from Hill 66 on the right flank. Lt. McGregor fearlessly went forward and located the enemy guns, and realised that it was impossible to get his guns carried forward either by pack or by hand without great delay, as the ground was absolutely bare and fire-swept. Ordering his men to follow by a more covered route, he mounted the limber and galloped forward under intense fire for about 600 yards to cover. The driver, horses and limber were all hit, but Lt. McGregor succeeded in getting the guns into action, effectively engaging the enemy, subduing their fire and enabling the advance to be resumed. With the utmost gallantry he continued to expose himself in order to direct and control the fire of his guns, until, about an hour later, he was killed. His great gallantry and supreme devotion to duty were the admiration of all ranks.