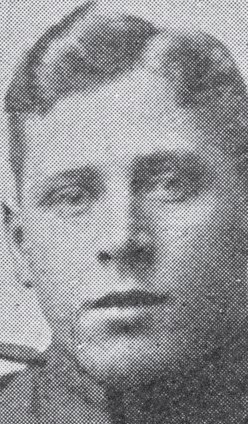 On 23 and 24 October 1918, Third and Fourth Armies continued their advance east of the River Selle. 9th Battalion The King’s Own Yorkshire Light Infantry was towards the right (southern) flank of Third Army. On the 23rd Acting Lieutenant Colonel H Greenwood distinguished himself by his gallantry during the capture of Ovillers, south-east of Solesmes and north of Le Cateau. The following day as his Division progressed north-east towards Englefontaine he again showed great gallantry in the fighting south of Poix-du-Nord. Just to the south of the road running north-east from Le Cateau-Cambrésis through Englefontaine, responsibility for the attack passed to Fourth Army. On 23 October 1918 25th Division advanced through Pommereuil, east of Le Cateau, and Private F G Miles 1/5th Battalion The Gloucestershire Regiment showed conspicuous bravery in capturing enemy machineguns in the western part of the Bois L’Évêque beyond. To the north, Bousies, to the south of the Le Cateau-Englefontaine road, was also captured on the 23rd. On the 24th, 6th Battalion The Northamptonshire Regiment was ordered to advance north-east to Hecq, just south of Englefontaine. Temporary Lieutenant F W Hedges played a significant role in the fighting that day near Renuart Farm, west of Hecq and north of Robersart.

For most conspicuous bravery and initiative in attack on the 23rd October, 1918, during the advance against the Bois L’Evêque, when his company was held up by a line of enemy machine guns in the sunken road near the Moulin J. Jacques. Pte. Miles alone, and on his own initiative, went forward, under exceptionally heavy fire, located a machine gun, shot the gunner, and put the gun out of action. Observing another gun near by, he again advanced alone, shot the gunner, rushed the gun, and captured the team of eight. Finally, he stood up and beckoned to his company, who, acting on his signals, were enabled to work round the rear of the line and to capture sixteen machine guns, one officer, and fifty other ranks. It was due to the courage, initiative, and entire disregard of personal safety shown by this very gallant soldier that the company was enabled to advance at a time when any delay would have jeopardised seriously the whole operation.