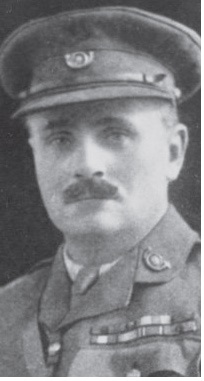 By 11 October 1918 Third and Fourth Armies east of Cambrai had reached the River Selle, which ran through Solesmes and Le Cateau-Cambrésis. The Battle of the Selle was launched on 17 October. On the 18th, 50th Division pushed forward a couple of miles east of Le Cateau to Bazuel.

For most conspicuous bravery, devotion to duty and fine leadership on the 23rd/24th October, 1918. When the advance of his battalion on the 23rd October was checked, and many casualties caused by an enemy machine-gun post, Lt.-Col. Greenwood single-handed rushed the post and killed the crew. At the entrance to the village of Ovillers, accompanied by two battalion runners, he again rushed a machine-gun post and killed the occupants. On reaching the objective west of Duke’s Wood his command was almost surrounded by hostile machine-gun posts, and the enemy at once attacked his isolated force. The attack was repulsed, and, led by Lt.-Col. Greenwood, his troops swept forward and captured the last objective, with 150 prisoners, eight machine guns and one field gun. During the attack on the Green Line, south of Poix Du Nord, on 24th October, he again displayed the greatest gallantry in rushing a machine-gun post, and he showed conspicuously good leadership in the handling of his command in the face of heavy fire. He inspired his men in the highest degree, with the result that the objective was captured, and, in spite of heavy casualties, the line was held. During the advance on Grand Gay Farm Road, on the afternoon of 24th October, the skilful and bold handling of his battalion was productive of most important results, not only in securing the flank of his brigade, but also in safeguarding the flank of the Division. His valour and leading during two days of fighting were beyond all praise.