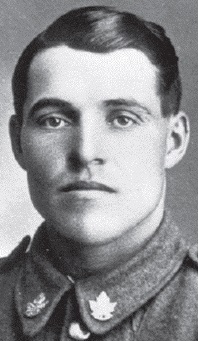 On 1 November 1918 First and Third Armies launched the Battle of Valenciennes to capture this strategic city on the banks of the Scheldt. The British had already crossed the Scheldt to the south of the city and were east of Maing by 25 October. It was therefore decided that the main attack should come from the south and 10th Canadian Brigade was detailed to capture Marly, just south-east of the city.

For most conspicuous bravery before Valenciennes on 1st November, 1918, when a machine gun opened on his platoon. Without a moment’s hesitation Serjt. Cairns seized a Lewis gun and single-handed, in the face of direct fire, rushed the post, killed the crew of five, and captured the gun. Later, when the line was held up by machine-gun fire, he again rushed forward, killing 12 enemy and capturing 18 and two guns. Subsequently, when the attack was held up by machine guns and field guns, although wounded, he led a small party to outflank them, killing many, forcing about 50 to surrender, and capturing all the guns. After consolidation he went with a battle patrol to exploit Marly and forced 60 enemy to surrender. Whilst disarming this party he was severely wounded. Nevertheless, he opened fire and inflicted heavy losses. Finally he was rushed by about 20 enemy and collapsed from weakness and loss of blood. Throughout the operation he showed the highest degree of valour, and his leadership greatly contributed to the success of the attack. He died on the 2nd November from wounds.