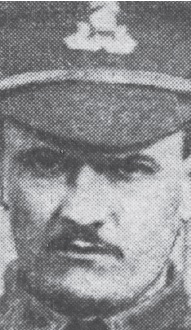 The Prelude to the Battle of the Sambre, France 2-4 November 1918

By the end of October 1918 the advance of Third and Fourth Armies eastwards from the River Selle had brought them to within striking distance of the Canal de la Sambre. In Third Army sector, from the Forêt de Mormal southwards, one of the most important features was the Happegarbes spur, south-west of Landrecies, which commanded the west bank of the Canal.

For most conspicuous bravery and initative during the attack at Happegarbe on 2nd November, 1918, when in command of a platoon, he led his men forward with great determination, and, on being held up by heavy machine-gun fire, rushed forward through a thick, strongly held ridge, captured in succession four machine guns and single-handed bayonetted the crews. Later, he led the remnants of his platoon to the capture of three machine guns and many prisoners. In the later stages of the attack on the same day, when his platoon was held up by enemy machine guns, he successfully led a Tank against them over very exposed ground. Continuing the attack on 3rd November, after capturing many prisoners and gaining his objective, he organised his line most skilfully and held up the enemy. On 4th November, in the attack on the Oise-Sambre Canal, under heavy fire from the Canal bank, he rushed forward with a Lewis gun team in the face of an intense barrage, brought the gun into action, effectively silenced the enemy’s fire, thus enabling his company to advance and gain their objectives. Throughout the whole of these operations Sjt. Clarke acted with magnificent bravery and total disregard of personal safety, and by his gallantry and high sense of duty set an inspiring example to all ranks.