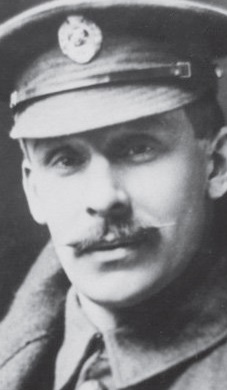 For most conspicuous bravery and self-sacrifice on the 4th November, 1918, near Ors, when with a party building a floating bridge across the Canal. He was foremost in the work under a very heavy artillery barrage and machine-gun fire. The latter was directed at him from a few yards distance while he was working on the cork floats; nevertheless, he persevered in his task, and his example and efforts were such that the bridge, which was essential to the success of the operations, was very quickly completed. The supreme devotion to duty of this gallant sapper, who collapsed from gas poisoning on completion of his work, was beyond all praise.