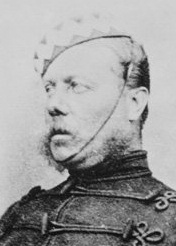 The Battle of Balaklava, Russia

On 25 October 1854 the Russians, hoping to disrupt Allied preparations and relieve the pressure on Sevastopol, attempted to advance westwards from the central Crimea towards the British base at Balaklava. This was defended by Turkish positions on the Causeway Heights but, under the pressure of the Russian onslaught, the Turks were forced to leave their guns and retreat down into the southern valley, re-forming around four companies of Sir Colin Campbell’s 93rd Highlanders, which were now the only troops between the Russians and the British base. Campbell’s men, Tennyson’s ‘thin red line’, steadfastly repelled the initial attack. The main Russian cavalry attack was then driven back by the Charge of the Heavy Brigade, six squadrons formed of 6th (Inniskilling) Dragoons, the Scots Greys and the 5th Dragoon Guards. The most famous part of the battle, the Charge of the Light Brigade, now took place. Though the sequence of events has been much debated it seems likely that Lord Raglan from his vantage point on the Sapouné Heights to the west was concerned that the Russians were attempting to remove the guns from the Turkish positions captured by the Russians on the Causeway Heights. He sent Captain Lewis Nolan with a final instruction to Lord Lucan, Commander of the Cavalry Division, who passed it on to Lord Cardigan, Commander of the Light Brigade, to charge and recapture these guns. It has been claimed that the only guns either man could see were those of the Russian artillery at the eastern end of the Northern Valley, though a variation in the gradient two thirds along itsuggeststhat from their position at the western end this may not have been possible. Nevertheless, the Light Brigade, its first line consisting of the 13th Light Dragoons, the 17th Lancers and the 11th Hussars, its second line formed by the 4th Light Dragoons and the 8th Hussars, now charged eastwards along the northern valley. Captain Nolan, the only man who knew they were attacking the wrong guns, careered across Cardigan’s path to say so but at that moment was killed by a shell. Despite the fact that the Russians were manning the heights on either side of the valley and firing down on them, the Light Brigade actually reached the Russian guns at the eastern end. Without any British support and with Russian cavalry racing to cut off their retreat, they had no alternative but to make their way back up the valley. More than 600 men took part in the Charge of the Light Brigade, of whom about 110 were killed, 57 taken prisoner and 465 returned to Britsh lines, 134 of them wounded. However, fewer than half of the horses remained alive and unhurt. As a fighting force, the Light Brigade had effectively ceased to exist and for the rest of the war the Causeway Heights were in Russian hands. The most that could be said was that the British base at Balaklava remained safe.

Saved the life of an Officer, in the Heavy Cavalry Charge at Balaklava, who was surrounded by Russian Cavalry, by his gallant conduct in riding up to his rescue and cutting off the head of one Russian, disabling and dispersing the others.