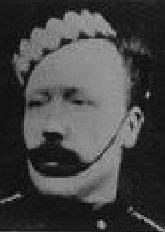 For having, at the Battle of Balaklava, galloped out to the assistance of Private McPherson, of the same Regiment, on perceiving him surrounded by seven Russians, when by his gallantry he dispersed the enemy, and saved his comrade’s life. For having, on the same day, when the Heavy Brigade was rallying, and the enemy retiring, finding his horse would not leave the ranks, dismounted and brought in a prisoner from the Russian lines. Also for having dismounted on the same day, when the Heavy Brigade was covering the retreat of the Light Cavalry, and lifted from his horse Private Gardiner, who was disabled from a severe fracture of the leg by around shot. Serjeant Ramage then carried him to the rear from under a very heavy cross fire, thereby saving his life, the spot where he must inevitably have fallen having been immediately afterwards covered by the Russian cavalry