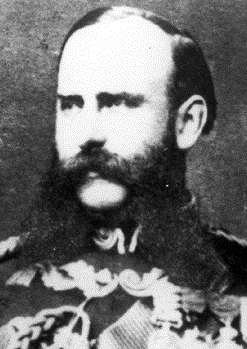 On 26 October 1854, the day after the Battle of Balaklava, a Russian force commanded by Colonel Federov advanced out of the Karabel Faubourg, the eastern suburb of Sevastopol, crossed the ravine running north to Careenage Bay and marched east along the foot of Mount Inkerman, before turning south at right angles to attack Sir George de Lacy Evans’ 2nd Division which was camped on the high ground above. On the slopes of Shell Hill they encountered a picket of the 49th Regiment and fierce fighting began. The Russians, then being pounded by the British artillery on Home Ridge behind Shell Hill, were eventually forced to retreat. Meanwhile, a smaller Russian force had advanced up the Careenage Ravine to attack the 2nd Division from the flank. Here they were halted by sixty volunteer sharpshooters, commanded by Captain G L Goodlake, 1st Battalion Coldstream Guards, who drove them back. The Russians were also repulsed from the Lancaster Batteries which overlooked Careenage Ravine from Victoria Ridge to the west.

For distinguished gallantry whilst in command of the sharpshooters furnished by the Coldstream Guards, on the 28th October, 1854, on the occasion of “the powerful sortie on the 2nd Division,” when he held the Windmill Ravine, below the Picquet House, against a much larger force of the enemy. The party of sharpshooters then under his command killed thirty-eight (one an officer) and took three prisoners of the enemy, (of the latter, one an Officer) Major Goodlake being the sole Officer in command. Also, for distinguished gallantry on the occasion of the surprise of a picket of the enemy, in November, at the bottom of the Windmill Ravine, by the sharpshooters, under his sole leading and command, when the knapsacks and rifles of the enemy’s party fell into his hands.