Born in May 1984, in Brussels, Chris Finney GC was grew up in Manchester and Ferndown, Dorset. Chris joined the Army in September 2000. In 2003 he was granted the freedom of the Metropolitan Borough of Stockport, Lancashire and in 2004 he received Pride of Britain award. Chris promoted to L Cpl in April 2006 and L Cpl of Horse in July 2007. He left the Army in 2009 and joined Joe Calzaghe Enterprises after which he and his wife started a garden centre in the West Country. Chris is married with three daughters. 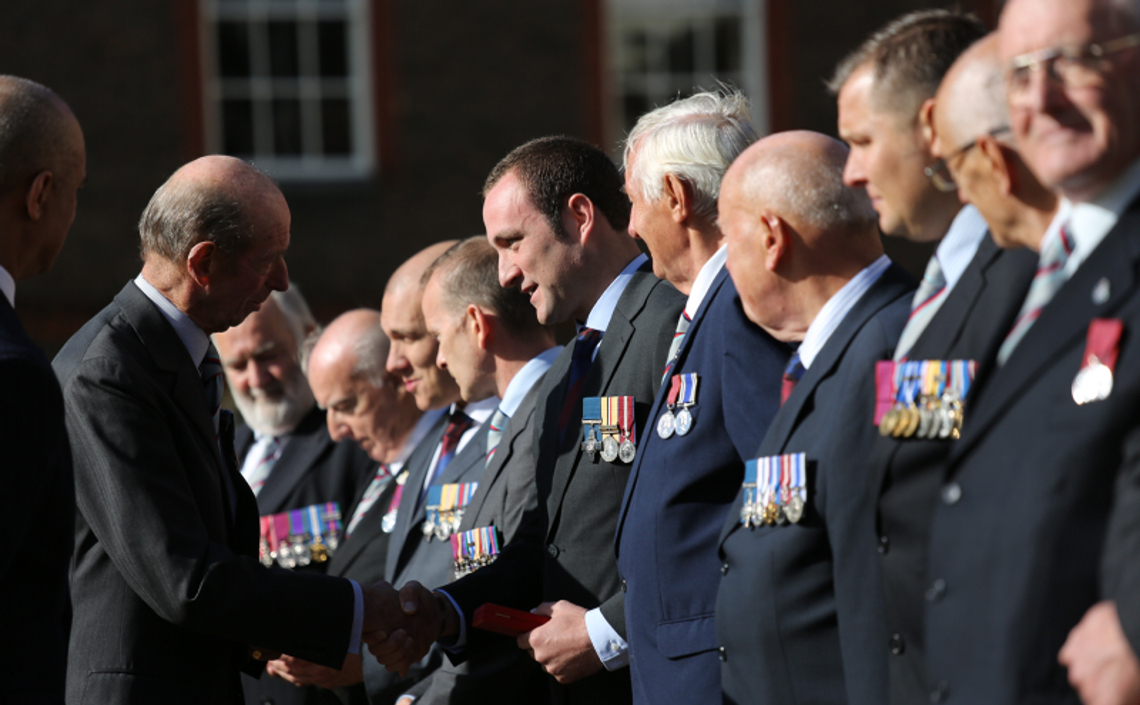 On 28th March 2003, D Squadron Household Cavalry Regiment was probing forward along the Shatt-al-Arab waterway, north of Basra, some thirty kilometres ahead of the main force of 16 Air Assault Brigade. In exposed desert, their mission was to find and interdict the numerically vastly superior, and better equipped, Iraqi 6th Armoured Division.

Trooper Finney, a young armoured vehicle driver with less than a year’s service, was driving the leading Scimitar vehicle of his troop, which had been at the forefront of action against enemy armour for several hours. In the early afternoon the two leading vehicles paused beside a levee to allow the troop leader to assess fully the situation in front. Without warning they were then engaged by a pair of Coalition Forces ground attack aircraft. Both vehicles were hit and caught fire and ammunition began exploding inside the turrets. Finney managed to get out of his driving position and was on the way towards cover when he noticed that his vehicle’s gunner was trapped in the turret. He then climbed on to the fiercely burning vehicle, at the same time placing himself at risk from enemy fire, as well as fire from the aircraft, should they return. Despite the smoke and flames and exploding ammunition he managed to haul out the injured gunner, get him off the vehicle, and move him to a safer position not far away, where he bandaged his wounds.

The troop officer, in the other Scimitar, had been wounded and there were no senior ranks to take control. Despite his relative inexperience, the shock of the attack and the all-too-obvious risk to himself, Finney recognized the need to inform his headquarters of the situation. He therefore broke cover, returned to his vehicle, which was still burning, and calmly and concisely sent a lucid situation report by radio. He then returned to the injured gunner and began helping him towards a Spartan vehicle of the Royal Engineers which had moved to assist.

At this point Finney noticed that both the aircraft were lining up for a second attack. Notwithstanding the impending danger he continued to help his injured comrade towards the safety of the Spartan vehicle. Both aircraft fired their cannon and Finney was wounded in the lower back and legs and the gunner in the head. Despite his wounds, Finney succeeded in getting the gunner to the waiting Spartan. Then, seeing that the driver of the second Scimitar was still in the burning vehicle, Finney determined to rescue him as well. Despite his wounds and the continuing danger from exploding ammunition he valiantly attempted to climb up onto the vehicle but was beaten back by the combination of heat, smoke and exploding ammunition. He collapsed exhausted a short distance from the vehicle and was recovered by the crew of the Royal Engineers’ Spartan.

During these attacks and their horrifying aftermath, Finney displayed clear-headed courage and devotion to his comrades which was out of all proportion to his age and experience. Acting with complete disregard for his own safety even when wounded, his bravery was of the highest order throughout.