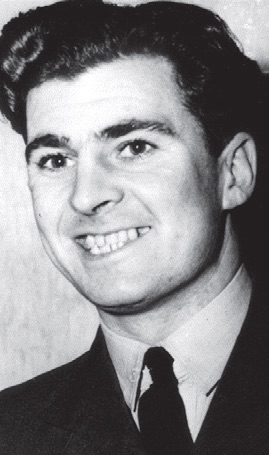 The Schweinfurt Raid in north-west Bavaria, 50 miles north-west of Nuremberg, was the centre of the German ball-bearing industry and thus an obvious target for Allied bombing. On the night of 26-27 April 1944 it was attacked by over 200 Lancaster Bombers. The plane on which Sergeant N C Jackson was flight engineer had taken off from RAF Metheringham, Lincolnshire.

This airman was the flight engineer in a Lancaster detailed to attack Schweinfurt on the night of 26th April, 1944. Bombs were dropped successfully and the aircraft was climbing out of the target area. Suddenly it was attacked by a fighter at about 20,000 feet. The captain took evading action at once, but the enemy secured many hits. A fire started near a petrol tank on the upper surface of the starboard wing, between the fuselage and the inner engine. Sergeant Jackson was thrown to the floor during the engagement. Wounds which he received from shell splinters in the right leg and shoulder were probably sustained at that time. Recovering himself, he remarked that he could deal with the fire on the wing and obtained his captain’s permission to try to put out the flames. Pushing a hand fire-extinguisher into the top of his life-saving jacket and clipping on his parachute pack, Sergeant Jackson jettisoned the escape hatch above the pilot’s head. He then started to climb out of the cockpit and back along the top of the fuselage to the starboard wing. Before he could leave the fuselage his parachute pack opened and the whole canopy and rigging lines spilled into the cockpit. Undeterred, Sergeant Jackson continued. The pilot, bomb aimer and navigator gathered the parachute together and held on to the rigging lines, paying them out as the airman crawled aft. Eventually he slipped and, falling from the fuselage to the starboard wing, grasped an air intake on the leading edge of the wing. He succeeded in clinging on, but lost the extinguisher, which was blown away. By this time, the fire had spread rapidly and Sergeant Jackson was involved. His face, hands and clothing were severely burnt. Unable to retain his hold, he was swept through the flames and over the trailing edge of the wing, dragging his parachute behind. When last seen it was only partly inflated and was burning in a number of places. Realising that the fire could not be controlled, the captain gave the order to abandon aircraft. Four of the remaining members of the crew landed safely. The captain and the rear gunner have not been accounted for. Sergeant Jackson was unable to control his descent and landed heavily. He sustained a broken ankle, his right eye was closed through burns and his hands were useless. These injuries, together with wounds received earlier, reduced him to a pitiable state. At daybreak he crawled to the nearest village, where he was taken prisoner. He bore the intense pain and discomfort of the journey to Dulag Luft with magnificent fortitude. After 10 months in hospital he made a good recovery, though his hands require further treatment and are only of limited use. This airman’s attempt to extinguish the fire and save the aircraft and crew from falling into enemy hands was an act of outstanding gallantry. To venture outside, when travelling at 200 miles an hour, at a great height and in intense cold, was an almost incredible feat. Had he succeeded in subduing the flames, there was little or no prospect of his regaining the cockpit. The spilling of his parachute and risk of grave damage to its canopy reduced his chances of survival to a minimum. By his ready willingness to face these dangers he set an example of self-sacrifice which will ever be remembered.