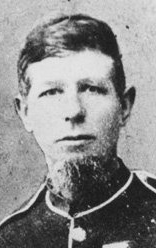 On 22 November 1854, two days after the British capture of Tryon’s Pits, the Russians attacked the forward trench of the British Left Attack at Sevastopol (see Private T Grady (qv)). On 5 December, Sergeant W McWheeney (qv), 44th Regiment, distinguished himself by his rescue of Corporal Courtney, a wounded sharpshooter. Finally, on 19 December, Private W Norman, 7th Regiment, who was on sentry duty in White Horse Ravine, was surprised and captured by three enemy soldiers. He was however soon able to overpower them, killing one and returning to the British lines with the other two as prisoners.

On the night of the 19th December, 1854, he was placed on single sentry, some distance in front of the advanced sentries of an outlying picquet in the White Horse Ravine, a post of much danger, and requiring great vigilance; the Russian picquet was posted about 300 yards in his front, three Russian soldiers advanced, under cover of the brushwood, for the purpose of reconnoitring. Private William Norman, single-handed, took two of them prisoners, without alarming the Russian picquet.