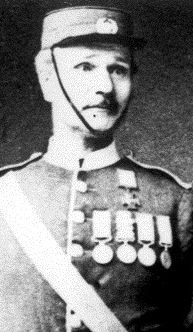 To block an advance by the French along the Victoria Ridge to attack the Malakov, Russian forces had constructed the Kamtchatka Lunette in front of the position. The French had been sapping their way towards this and on 22 March 1855 in an attempt to protect it General Kroulev, with over 5,000 men, attacked the French on Victoria Ridge in a night sortie. At the same time the Russians took the opportunity to assault both the British Right Attack on the Woronzov Ridge and the Left Attack on Green Hill, the two neighbouring ridges to the west. The 57th Regiment was among the British defenders of Green Hill and the 77th Regiment among those on Woronzov Ridge. These Russian attacks had some initial success but were driven back by the British.

For distinguished coolness and gallantry upon the occasion of a sortie by the enemy, and when he was acting as Orderly Serjeant to the Field-Officers of the trenches,–Left Attack upon Sevastopol,– in having rallied the covering parties which had been driven in by the Russians, thus regaining and keeping possession of the Trenches. Also, for unflinching and devoted courage in the attack on the Redan, on the 18th June, 1855, in having remained, and encouraged others to remain in the holes made by the explosion of shells, from whence, by making parapets of the dead bodies of their comrades, they kept up a continuous fire until their ammunition was exhausted, thus clearing the enemy from the parapet of the Redan. This was done under a fire in which nearly half the officers, and a third of the Rank and File of the Party of the Regiment were placed hors de combat.