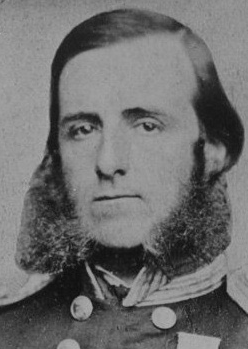 In May 1855 a large British and French naval force, carrying 15,000 Allied infantry, sailed for the Strait of Kertch, which divided the eastern Crimea from the Russian mainland. Its object was to destroy the fortifications at the Strait and then sail north into the Sea of Azov, disrupting Russian supply lines. A steam flotilla under Captain Lyons, which had entered the Sea of Azov, sank Russian military and merchant shipping and mounted various shore actions. On 29 May, Lieutenant C W Buckley of HMS Miranda, with Lieutenant H T Burgoyne of HMS Swallow and Gunner J Robarts from HMS Ardent, landed near Genitchi on the north-west of the Sea of Azov, opposite the Spit of Arabat and at the entrance to the Putrid Sea. Despite meeting stiff Russian opposition, they set fire to government buildings, corn stores and ammunition dumps. They were accompanied on the raid by Boatswain H Cooper (qv), who was to distinguish himself by his gallantry in assisting Lieutenant C W Buckley at Taganrog on 3 June.

Lord Lyons reports that–“Whilst serving as junior Lieutenant of the ‘Miranda,’ this Officer landed in presence of a superior force, and set fire to the Russian stores at Genitchi;” and “he also performed a similar desperate service at Taganrog.” The first service referred to occurred after the shelling of the town of Genitchi, on the 29th May, 1855. After mentioning that the stores were in a very favourable position for supplying the Russian Army, and that, therefore, their destruction was of the utmost importance, Captain Lyons writes: “Lieutenant Cecil W. Buckley, Lieutenant Hugh T. Burgoyne, and Mr. John Roberts, gunner, volunteered to land alone, and fire the stores, which offer I accepted, knowing the imminent risk there would be in landing a party in presence of such a superior force, and out of gun-shot of the ships. This very dangerous service they most gallantly performed, narrowly escaping the Cossacks, who all but cut them off from their boat.” (Despatch from Admiral Lord Lyons, 2nd June, 1855, No. 419.) The second volunteer service was performed while the town of Taganrog was being bombarded by the boats of the Fleet, and is thus recorded by Captain Lyons :–“Lieutenant Cecil Buckley, in a four-oared gig, accompanied by Mr. Henry Cooper, Boatswain, and manned by volunteers, repeatedly landed and fired the different stores and Government buildings. This dangerous, not to say desperate service (carried out in a town containing upwards of 3,000 troops, constantly endeavouring to prevent it, and only checked by the fire of the boats’ guns), was most effectually performed.”