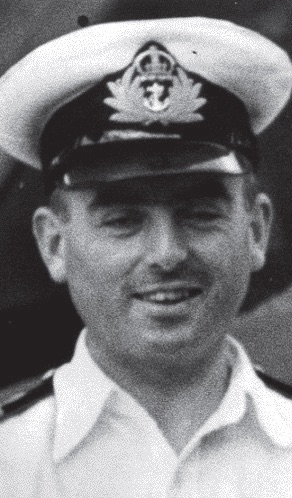 On the evening of 11 February 1942, three German battlecruisers, Scharnhorst, Gneisenau and Prinz Eugen, escorted by other ships, sailed from Brest in Brittany for their home ports. This so-called ‘Channel Dash’ went undetected for many hours. At midday on 12 February six Fairey Swordfish torpedo biplanes of 825 Squadron RN commanded by Lieutenant Commander E Esmonde took off from RAF Manston, Kent. They made contact with the German ships about ten miles north-east of Calais. Esmonde led them into the attack but all were shot down. Only five crew members survived the operation, four officers who were awarded the DSO and a single air-gunner the CGM.

On the morning of Thursday, 12th February, 1942, Lieutenant-Commander Esmonde, in command of a Squadron of the Fleet Air Arm, was told that the German Battle-Cruisers Scharnhorst and Gneisenau and the Cruiser Prinz Eugen, strongly escorted by some thirty surface craft, were entering the Straits of Dover, and that his Squadron must attack before they reached the sand-banks North East of Calais. Lieutenant-Commander Esmonde knew well that his enterprise was desperate. Soon after noon he and his squadron of six Swordfish set course for the Enemy, and after ten minutes flight were attacked by a strong force of Enemy fighters. Touch was lost with his fighter escort; and in the action which followed all his aircraft were damaged. He flew on, cool and resolute, serenely challenging hopeless odds, to encounter the deadly fire of the Battle-Cruisers and their Escort, which shattered the port wing of his aircraft. Undismayed, he led his Squadron on, straight through this inferno of fire, in steady flight towards their target. Almost at once he was shot down; but his Squadron went on to launch a gallant attack, in which at least one torpedo is believed to have struck the German Battle-Cruisers, and from which not one of the six aircraft returned. His high courage and splendid resolution will live in the traditions of the Royal Navy, and remain for many generations a fine and stirring memory.