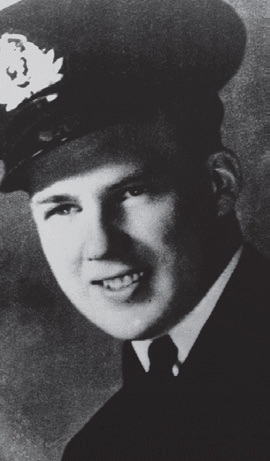 The Battle of Leyte Gulf off the Philippines in October 1944 had left the Japanese navy virtually destroyed as an effective fighting force. On 9 August 1945, as part of a series of raids on Japanese warships in Onagawa Wan (Bay), off north-eastern Honshu Island, Japan, there was an attack led by Lieutenant R H Gray of eight Corsairs from HMS Formidable. Gray sank the destroyer Amakusa and was the only Allied casualty of the raid. The same day the second atomic bomb was dropped on Japan, destroying much of Nagasaki. Japan surrendered on 15 August and the formal surrender documents were signed on 2 September.

Whitehall, 13th November, 1945. the late Temporary Lieutenant Robert Hampton Gray, R.C.N.V.R., for great valour in leading an attack on a Japanese destroyer in Onagawa Wan on 9th August, 1945. In the face of fire from shore batteries and a heavy concentration of fire from some five warships Lieutenant Gray pressed home his attack, flying very low in order to ensure success, and, although he was hit and his aircraft was in flames, he obtained at least one direct hit, sinking the destroyer. Lieutenant Gray has consistently shown a brilliant fighting spirit and most inspiring leadership.•
GOVERNMENT HOUSE, OTTAWA Lieutenant Robert Hampton Gray, D,S,C,, R.C.N.V.R. Lieutenant Robert Hampton Gray, D.S.C., R.C.N.V.R., of Nelson, B.C., flew off the Aircraft Carrier, H.M.S. Formidable on August 9, 1945, to lead an attack on Japanese shipping in Onagawa Wan (Bay) in the Island of Honshu, Mainland of Japan. At Onagawa Bay the fliers found below them a number of Japanese ships and dived into attack. Furious fire was opened on the aircraft from Army batteries on the ground and from five warships in the Bay. Lieutenant Gray selected for his target a Japanese destroyer. He swept in, oblivious of the concentrated fire and made straight for his target. His aircraft was hit, and hit again, but he kept on. As he came close to the destroyer his plane caught fire but he pressed on to within fifty feet of the Japanese ship and let go his bombs. He scored at least one direct hit, probably more. The destroyer sank almost immediately. Lieutenant Gray did not return. He had given his life at the very end of his fearless run in to bomb.••