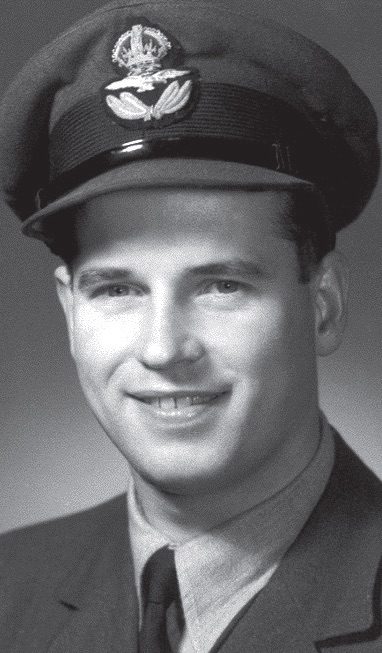 Wing Commander G P Gibson distinguished himself from the beginning of the War but his most famous action was the Dambusters Raid of 16-17 May 1943. The armaments industry of the Ruhr was heavily dependent on hydro-electricity generated by a series of dams, including those on the Möhne and Sorpe Rivers, which are tributaries of the River Ruhr, respectively east and south-east of Dortmund, and that on the Eder, a tributary of the Fulda to the south over the Rothaargebirge. On 16-17 May 1943 nineteen Avro Lancasters of 617 Squadron led by Gibson attacked these dams (Operation Chastise) using the bouncing bomb developed by Barnes Wallis. The Möhne and Eder Dams, built of stone (so-called gravity dams), were breached. The Sorpe Dam, constructed of earth and concrete, was less badly damaged. Despite the scale of the devastation, German industrial capacity was restored within a couple of months. Eight of the nineteen aircraft that took part in the raid were shot down.

This officer served as a night bomber pilot at the beginning of the war and quickly established a reputation as an outstanding operational pilot. In addition to taking the fullest possible share in all normal operations, he made single-handed attacks during his “rest” nights on such highly defended objectives as the German Battleship Tirpitz, then completing in Wilhelmshaven. When his tour of operational duty was concluded, he asked for a further operational posting and went to a night-fighter unit instead of being posted for instructional duties. In the course of his second operational tour, he destroyed at least three enemy bombers and contributed much to the raising and development of new night-fighter formations. After a short period in a training unit, he again volunteered for operational duties and returned to night bombers. Both as an operational pilot and as leader of his squadron, he achieved outstandingly successful results and his personal courage knew no bounds. Berlin, Cologne, Danzig, Gdynia, Genoa, Le Creusot, Milan, Nuremberg and Stuttgart were among the targets he attacked by day and by night. On the conclusion of his third operational tour, Wing Commander Gibson pressed strongly to be allowed to remain on operations and he was selected to command a squadron then forming for special tasks. Under his inspiring leadership, this squadron has now executed one of the most devastating attacks of the war - the breaching of the Moehne and Eder dams. The task was fraught with danger and difficulty. Wing Commander Gibson personally made the initial attack on the Moehne dam. Descending to within a few feet of the water and taking the full brunt of the anti-aircraft defences, he delivered his attack with great accuracy. Afterwards he circled very low for 30 minutes, drawing the enemy fire on himself in order to leave as free a run as possible to the following aircraft which were attacking the dam in turn. Wing Commander Gibson then led the remainder of his force to the Eder dam where, with complete disregard for his own safety, he repeated his tactics and once more drew on himself the enemy fire so that the attack could be successfully developed. Wing Commander Gibson has completed over 170 sorties, involving more than 600 hours operational flying. Throughout his operational career, prolonged exceptionally at his own request, he has shown leadership, determination and valour of the highest order.