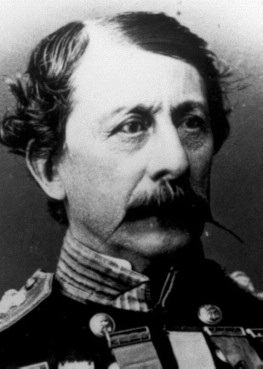 In the period between 17 and 19 September 1855 Lieutenant Commander G F Day carried out two reconnaissances on shore to see whether an attack on Russian gunboats was possible within the Straits of Genitchi. On the second occasion he was forced to spend all night ashore, having failed to attract the attention of the boat waiting to collect him. He decided an attack was not feasible.

With great enterprise and gallantry, landed, and successfully carried out a reconnoissance, within the enemy’s lines at Genitchi. This service was performed by Commander Day, with the view of ascertaining the practicability of reaching the enemy’s gun-vessels, which lay within the Straits of Genitchi, close to the town. It was performed by Commander Day alone on a dark but fine night, with the assistance of a pocket- compass. After traversing four or five miles of low swampy ground, occasionally up to his knees in water, he at length advanced to within about 200 yards of the vessels. From the perfect silence on board them, it was his conviction that they were without crews, and when he returned, it was with the full impression that the expedition was a feasible one. This opinion, however, he was induced to change on the following day, in consequence of the increasing activity which was apparent in the direction of the vessels, and therefore he determined on making a second visit to the spot. On this occasion the night was a squally one, and the journey longer and more difficult than before. On reaching the spot, finding the vessels manned, and their crews apparently on the alert, he decided that any attempt to surprise them was out of the question. (Despatch from Admiral Lord Lyons, 9th October, 1855, No. 844.) N.–B.–It was while attempting a reconnoissance on the same ground, that Captain L’Allemand, of the French steam-vessel “Mouette,” lost his life.