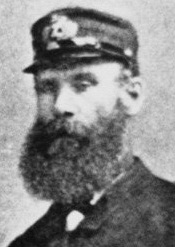 The Crimean shore of the Putrid Sea, off the Sea of Azov, Russia 11 October 1855

On 11 October 1855 Commander J E Commerell of HMS Weser in the Sea of Azov, accompanied by his Quartermaster W Rickard and Mate G Milestone, together with two other crew members, landed a small boat on the Spit of Arabat, dragged it over the Spit, then rowed across the Putrid Sea to the Crimean Coast near the Salgir river. Leaving two sailors to guard the boat, they moved inland and set fire to a major Russian forage store. On the way back, Milestone was overcome by exhaustion, but Commerell and Rickard managed to bring him to safety.

“Accompanied his Commander, Lieutenant Commerell, of the ‘Weser,’ to the Crimean shore of the Sivash, and, whilst under a heavy fire of musketry, remained to assist George Milestone, who had fallen.” (Despatch from Admiral Lord Lyons, 6th November, 1855, No. 899). The service performed by William Rickard is thus described by Commander Commerell, in his despatch:–“I must bring to your notice the excellent conduct of the small party who accompanied me, more especially that of William Rickard, Quartermaster, who, though much fatigued himself, remained to assist the other seaman, who, from exhaustion, had fallen in the mud, and was unable to extricate himself, notwithstanding the enemy were keeping up a heavy fire on us, at the distance of thirty or forty yards, as we crossed the mud.”