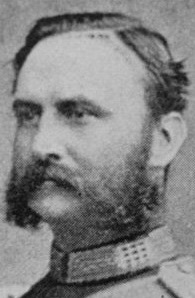 In preparation for an attempt to expel the East India Company’s force, a Persian army had encamped at Borazjun, about fifty miles to the north of Bushire on the road over the mountains to Shiraz. In an attempt to retain the initiative, on 3 February 1857 Major General Outram led a column out of Bushire and marched on Borazjun, which he occupied on 5 February. The Persians had retreated to the north in the hope of luring their enemy into the mountains but, though tempted, Outram decided not to follow them. Late on 7 February, having run out of supplies, he began to march back to the coast. The Persian army attempted to cut him off and the following day confronted him at Kushab. They were routed by charges of the 3rd Regiment Bombay Light Cavalry which succeeded in breaking one of the squares of Persian infantry. Outram’s force returned to Bushire at night on 9 February.

On the occasion of an attack on the enemy on the 8th of February, 1857, led by Lieutenant-Colonel Forbes, C.B., Lieutenant Moore, the Adjutant of the Regiment, was, perhaps, the first of all by a horse’s length. His horse leaped into the square, and instantly fell dead, crushing down his rider, and breaking his sword as he fell amid the broken ranks of the enemy. Lieutenant Moore speedily extricated himself, and attempted with his broken sword to force his way through the press; but he would assuredly have lost his life, had not the gallant young Lieutenant Malcolmson, observing his peril, fought his way to his dismounted comrade through a crowd of enemies to his rescue, and, giving him his stirrup, safely carried him through everything out of the throng. The thoughtfulness for others, cool determination, devoted courage, and ready activity shewn in extreme danger by this young Officer, Lieutenant Malcolmson, appear to have been most admirable, and to be worthy of the highest honour.