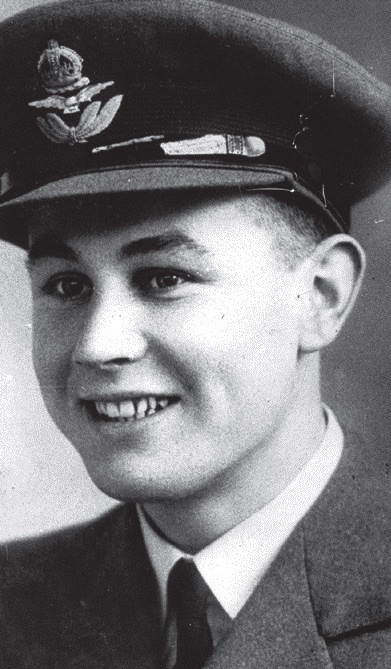 The Nuremberg Raid on the night of 30-31 March 1944, almost 800 planes took part in an air raid on Nuremberg. Damage to the city was not significant and 96 planes were lost, the single greatest loss of aircraft suffered by Bomber Command on any one night during the War. Flying Officer C J Barton took off from RAF Burn, south-west of Selby, flying a Handley Page Halifax bomber. After the raid, Barton piloted the stricken aircraft back to the UK, crash-landing just after he had reached the coast at Ryhope, south of Sunderland, County Durham.

On the night of 30th March, 1944, Pilot Officer Barton was captain and pilot of a Halifax aircraft detailed to attack Nuremberg When some 70 miles short of the target, the aircraft was attacked by a Junkers 88 The first burst of fire from the enemy made the intercommunication system useless One engine was damaged when a Messerschmitt 210 joined the fight The bomber’s machine guns were out of action and the gunners were unable to return the fire 2 Fighters continued to attack the aircraft as it approached the target area and, in the confusion caused by the failure of the communications system at the height of the battle, a signal was misinterpreted and the navigator, air bomber and wireless operator left the aircraft by parachute 3 Pilot Officer Barton faced a situation of dire peril His aircraft was damaged, his navigational team had gone and he could not communicate with the remainder of the crew If he continued his mission, he would be at the mercy of hostile fighters when silhouetted against the fires in the target area and if he survived, he would have to make a 4½ hours journey home on three engines across heavily-defended territory Determined to press home his attack at all costs, he flew on and, reaching the target, released the bombs himself 4 As Pilot Officer Barton turned for home the propeller of the damaged engine, which was vibrating badly, flew off It was also discovered that two of the petrol tanks had suffered damage and were leaking Pilot Officer Barton held his course and, without navigational aids and in spite of strong head winds, successfully avoided the most dangerous defence areas on his route Eventually he crossed the English coast only 90 miles north of his base 5 By this time the petrol supply was nearly exhausted Before a suitable landing place could be found, the port engines stopped The aircraft was now too low to be abandoned successfully Pilot Officer Barton therefore ordered the three remaining members of his crew to take up their crash stations Then, with only one engine working, he made a gallant attempt to land clear of the houses over which he was flying The aircraft finally crashed and Pilot Officer Barton lost his life, but his three comrades survived 6 Pilot Officer Barton had previously taken part in 4 attacks on Berlin and 14 other operational missions On one of these, two members of his crew were wounded during a determined effort to locate the target despite appalling weather conditions In gallantly completing his last mission in the face of almost impossible odds, this officer displayed unsurpassed courage and devotion to duty
This Citation as printed in the Gazette is devoid of full stops.