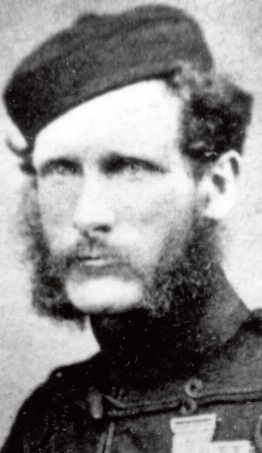 The centenary of the Battle of Plassey fell on 23 June 1857 and there was a widespread belief in India that British rule would end on that day. The mutineers chose it to mount another attack on the rear of the British position. They advanced through the Sabzi Mandi, to the south-west of the Ridge, threatening the Mound Battery to the north, which protected the British camp, and Hindu Rao’s House on the Ridge itself. The British cleared the streets of the Sabzi Mandi three times but on each occasion the mutineers reoccupied them. Fighting continued all day but the British eventually prevailed, strengthened by the arrival at Delhi earlier in the day of reinforcements under Major W Olpherts VC. A picket was posted in Sabzi Mandi to prevent further rebel incursions through it. In the fighting that day Colour Sergeant S Garvin, 60th Regiment, led an attack on the Sammy House (a corruption of Swami House or Temple), on the City side of the southern end of the Ridge, while Private J McGovern distinguished himself by rescuing a wounded soldier.

For daring and gallant conduct before Delhi on the 23rd of June, 1857, in volunteering to lead a small party of men, under a heavy fire, to the “Sammy House,” for the purpose of dislodging a number of the Enemy in position there, who kept up a destructive fire on the advanced battery of heavy guns, in which, after a sharp contest, he succeeded. Also recommended for gallant conduct throughout the operations before Delhi.